Malaysia chess history is an area that i will be always interested in. I was inspired by the book of Sejarah Catur Indonesia (Indonesia Chess History) by Ds.F.K.N Harahap which contains valuable information about chess development, important facts and data, theories , hypothesis about Indonesia chess history brought by by the hindu's wanderers way back from one decade before christ ( b.c ) , the dutch colonial in the 16th century , period in world war 1 & 11 and untill Indonesia participation at the Chess Olympiad, Thessalonika, Greece in 1984.

Recently i done a so-called "research" from the internet, books and magazines regarding Malaysia chess histrory. Actually there is many important moments happens in Malaysia such as 1990 final world championship candidates' match between Anatoly Karpov and Jan Timman in Kuala Lumpur but unfortunetly there is no proper information, photos whatsoever in this important moment . I hope my small initiative here could be share with others chess enthuist to properly record Malaysia chess history for our own knowledge and perharps for younger generations.

So far my main resources is from Penang Chess Association Website - the lovely and fascinating website from Malaysia chess history point of view. The history information, photos supplied by Malaysia famous chess person Quah Seng Sun in this website and another great sources - his Online Chess Column in The Star was unbelieveable. I also done some random research in the internet and i hope that anyone that intersted to share, add and correct! this work, you are always welcome. There is a few information that is not clear were written in red. 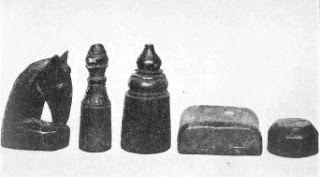 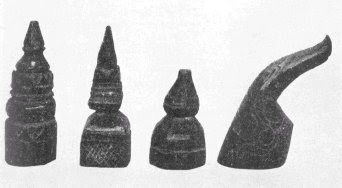 Excerpt from the book - Chessmen for collectors - Victor Keats (pg/181)

"The game of chess as played by people dwelling in the |Malay Peninsula is, as would be expected, the same as that of their close neighbors and co-religionists of Sumatra and Java. Malayan names of the piece are derived from Persian and although much chess is played throughout the Peninsula, no chessmen of any great merit have originated there. There is no recognized traditional type of chess piece associated with Malaya, but simple playing pieces based on Muslim sets were made from nineteenth century onwards. This simple sets were turned to similar Muslim design but with straight- sided diabolo forms surmounted by oviform finials. One side was stained or dyed either red or green and the material used was either Malayan ivory or softwood. They were used before the nineteenth century and are still played with today using the same design. The bishop are 13/4 in (4.5cm) high and the Pawns 7/8 in (2.2cm) high."

7th c AD - Located on the maritime roads linking China and Japan to India and Persia, the Malay islands and peninsula have been influenced by a deep and strong Indian influence before the islamisation, since the 7th c AD. Those people adopted Buddhism and Hinduism and rules mighty empires like the Çailendra at Java from 7th to 12th c. which built Borobudur temple, Çrivijaya at Sumatra from 8th to 13th c., and Majapahit in the 14th c.


Malay Island probably took Chess as well from Indians. Chess is attested there since the first European (Portuguese) contacts at the beginning of the 16th c. and seemed already well known when it happened. However, the game was later on deeply influenced by the European play. For instance, the modern moves for the Queen and the Bishop were adopted.

Main means "game" and Chator is obviously "chess", as a broken form of Sanskrit Chaturanga. The Malay name of the pieces also come from Sanskrit (Raja, Mantri, Gajah) or from Tamil and Telegu, Dravidian languages from South East India (Kuda, Ter, Chemor). The only exception is Bidaq which obviously is inherited from Muslim contacts (Baidaq in Arabic).

My personal opinion is in the past, the game was once called chator or catur but not "main" chator/ catur because in Malay, main is and adjective while chator/catur is a noun. - Hairulov


Two kinds of sets exists. One very basic, carved in 10 mn from bamboo or other vegetals with abstract shapes, the other is finely carved. Interestingly, the Rook is represented by a Boat there, like in certain parts of India and in Burma. It probably denotes the Hindu influence, a common character with Thailand and Cambodia where Boat is name of the piece.
source : http://history.chess.free.fr/mainchator.htm 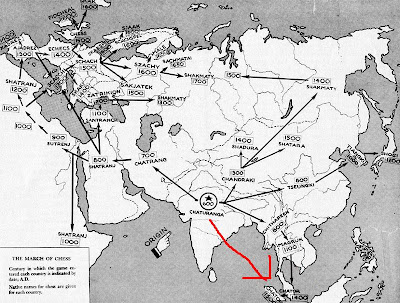 Tun Bahara his name and he is from Pasai (Indonesia) came to Malacca. He was a strong chess player and no players can match him at that time. He played with many players from Malacca but all lost to him but there's one player - Tun Pikrama who offered strong resistance against him. However   Tun Pikrama also failed to match Tun Bahara especially when Tun Pikrama is not concentrated  on the game and even Tun Bahara can give  and odd ( playing with one pawn less) and still won the game.


1856-1908 Wan Ahmad bin Muhammad Zain (1856 - 1908) or Syeikh Wan Ahmad Patani is a famous Muslim Scholar in South East Asia.He debate the origin word of chess in Malay - catur which being used by Malaysian and Indonesian .


“…Catur (chess) word originated from the word syatrunj, so it was suit to Malay tounge to catur…”

1935 or is it 1933 ?  -  Xie Xiashun, nick-named "Centurian chess king" because at 100 years old, he was a strong player in all the three forms of chess. Xie, not related to former women's world champion Xie Jun, helped to promote the game and was the top player in China after the 2nd World War. In 1935, he visited Malaya and Singapore and defeated their champion as well as the British Air Forces champion Hunter.

1949  -  The first Malayan Chess Champion was Dutchman - J.Fernhout (Java). The event was held at Boston Cafe in Penang on 16-18 April and attracted entries from Java, Singapore, Penang, Selangor and Kedah. A trophy, a silver king valuing $500, was donated by Aw Boon Haw, a Burmese  Chinese  entrepreneur and philanthropist known for introducing Tiger Balm in Malaya.

1952- G.H. Brownbill is  the 4th  Malayan Chess Championship champion  held on 11-13 April in the Central Hall of the Faculty of Medicine, University Malay, Singapore. - source: Singapore Chess: A History, 1945-1990

1955  -  Malayan championship was held at the Selangor Chinese Recreation Club in Kuala Lumpur from 8–10 April. Among the participants are  Bock Jam Loon (Kuala Lumpur champion), Tay Kheng Hong, Lim Kok Ann, Elaine and David Pritchard. The event was won by David Pritchard after he scored against Elaine in a 7-hour game in the last day of the competition. In a field of 10 players, he was followed by Lim Kok Ann and Elaine Pritchard (former British Ladies Champion) , Lee Chai Seng, and Foo Lum Choon.
source: Singapore Chess: A History, 1945-1990

1959 - Malayan championship was held at the Alumni Hall, University of Malaya  in March 1959. The tournament was won by John C. Hickey.  his third Malayan Chess Championship.

1965 - In April 1965, Singapore Chess Federation (SCF) partnered with the Chess Association of Malaya to host “the first Malaysian chess championship,” a competition open to “people in all Malaysian States.”
The event was held at the Medical Alumni Association, Singapore, 16 to 19 April, with $150 cash prize for the winner, $75 for the runner-up and $25 for the third. Singapore was represented by Tan Lian Ann, Giam Choo Kwee, and Tay Kheng Hong. In addition to these three names, there was Hasan bin Sidek, a Malacca school teacher, Phoon Wai-On and Mok Kwong Yue. Tan Lian Ann was the champion , followed by Giam Choo Kwee.
source: Singapore Chess: A History, 1945-1990 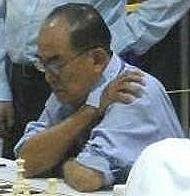 1961-1971 - Somewhere between that years former World Chess Champion - Dr. Max Euwe give a simul in Malaysia


1972 - Malaysian Team particapted in the 20th Chess Olympiad at Skopje, Yugoslavia. The first ever since the initiation of the Chess Olympiad!


1972 - April 1972 the President of the International Chess Federation, Professor Max Euwe was in Kuala Lumpur, and five students from Penang were selected to participate in a simultaneous match against him.


MSSM Chess started in December 1972. It was initiated after a visit by then President of FIDE Max Euwe (ex- World Chess Champion)  to Tun Hussein Onn. Former world champion Euwe conducted a 25 board simul held in St John's Institution against schoolboys from different states.

1972 – The Malaysian Schools Sports Council or MSSM hold its first national students team chess championships at the Dewan Sri Pinang from Dec 28 to 30 1972. Chess was introduced into the Majlis Sukan Sekolah-sekolah programme. States started organising state-level chess tournaments and it culminated at the year’s end with the first-ever MSSM team chess championship.

It is being held to coincide with the Pesta Celebrations and was officially declared open by the Minister of Education, Dato Hussein Onn at 3pm on Dec 28 1972. Selangor won the events.

1972 - Malaysia participated at 20th Chess Olympiad 1972 at Skopje, Yugoslavia, the first ever since the initiation of the Chess Olympiad!!!

1973 in 1973 or so, there was a weekly programme on RTM1 to teach chess to beginners. The presenter was High Court Judge Dato' Annuar (is it Y.A. Dato’ Anuar Bin Dato’ Zainal Abidin ? ) who was the president of the Perak Chess Association.

1974 Chess Association Of Selangor (right) , one of the oldest and most active chess associations in the country were form . The first 'Selangor Open' was launched soon after the establishment of The Chess Association of Selangor ('CAS') .Till now (2008), it's the longest running chess event in Malaysia.

1974 was the year that Fide celebrated its Golden Jubilee. It was founded in 1924. As part of its celebration that year, FIDE held its Bureau Meeting in Penang!!   The Fide bigwigs turned up in force, including Col Ed Edmondson of the USCF. Campomanes  was in Penang  and also Ineke Bakker who was Fide Sec-Gen. 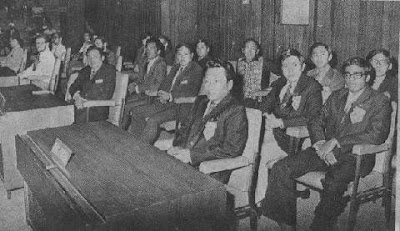 1974- at the invitation of the Malaysian business tycoon Dato Tan Chin Nam, then President of the reorganized Malaysian Chess Federation, China was invited to attend the 1st Asian Team Championship with observer status. It was also in 1974 that China held its first National Championship tournament. The first international tournament ever held in China was in 1980.