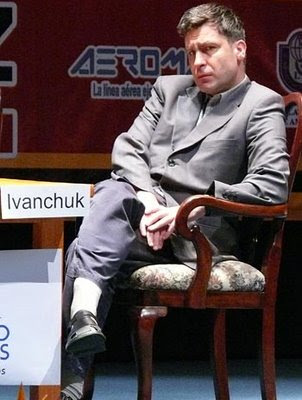 a photographic or eidetic memory and developmental disabilities, resulting from congenital brain abnormalities.

But what made the article interesting for me is he gave another example of autistic savant which is well known for all serious chess player – Vassily Ivanchuk! Below are axcerpt from te article.

….'Widely understood by Grandmasters that Vassily Ivanchuk is probably autistic. He also loves poetry, and has memorized one hundred Russian poems. I asked his wife,'why did it not last? Were you both too young?' 'No. That wasn't it at all. With Vassily, all there was chess, chess, chess, and more chess'…..

I search on the internet about autistic. Below are my findings.

An autistic savant (historically described as idiot savant) is a person with both autism and savant syndrome. Savant syndrome describes a person having a severe developmental or mental handicap with extraordinary mental abilities not found in most people. This means a lower than average general intelligence (IQ) but very high narrow intelligence in one or more fields. Savant syndrome skills involve striking feats of memory and arithmetic calculation and sometimes include unusual abilities in art or music. Savant syndrome is sometimes abbreviated as "savantism", and individuals with the syndrome are often nicknamed savants. This can be a source of confusion since a savanter is a person of learning, especially one of great knowledge in a particular subject.

· adjective: characteri tic of or suffering from autism

· noun: (psychiatry) an abnormal absorption with the self; marked by communication disorders and short attention span and inability to treat others as people

Below are previous ICC interview with Ivanchuk

You have no right to diagnose or misdiagnose people. You are not qualified and even if you were a qualified psychiatrist or phycologist then you would still be prevented through your ethical and professional obligations.

To annouce your chess tournaments/events ( simul, seminar, etc.) , email the details to me at hairulov@gmail.com